About 120 participants representing road authorities, governments, industry and end users attended the final event of the CEF project InterCor “The future of cooperative mobility services”, on the 13th of February in Brussels, Belgium. The event concluded the 3.5-year work of 4 European countries (the Netherlands, Belgium/Flanders, France and the United Kingdom) for a better future of transport across borders.

International cooperation between public authorities and the industry and clear benefits for end users are key to achieve large-scale, harmonised deployment of C-ITS in Europe and a safer, cleaner and more efficient mobility future on the roads – there are the main conclusions that came out of the InterCor final event – “The future of cooperative mobility services”, which took place on the 13th of February in Brussels and saw participation from about 120 transport stakeholders representing the entire mobility sector.

Four European countries open doors for cross-border, interoperable deployment of C-ITS.
The Netherlands, Belgium/Flanders, France and the United Kingdom have been piloting and evaluating cross-border interoperability of C-ITS services since the beginning of the ambitious CEF funded project InterCor. After 3.5 years of work, the project achieved interoperability between different European countries (and beyond by contributing to the C-Roads Platform) by testing different C-ITS services with four international TESTFEST events open to public and private organisations across Europe. Technical evaluation has shown that the technology works, and common upgraded specifications enabled seamless interoperability and availability of services across borders, made very effective by ITS-G5, cellular communications and their “hybrid” combination. More work is however needed towards a common European data framework. The assessment of the impact of C-ITS services and evidence of end user acceptance, who indicated they would use the services and that these would positively influence their behaviour. The project results show that way the information is presented to the users (via the HMI, Human Machine Interface) has a significant impact on the user acceptance of services: C-ITS services should be always integrated in existing navigation apps / devices (this would also mitigate issues such as distraction); the HMI design and the ability to customise it could improve the value of services; on the infrastructure side, the existing traffic control systems will need to be modified to enable the creation of nationally and internationally deployable C-ITS services. 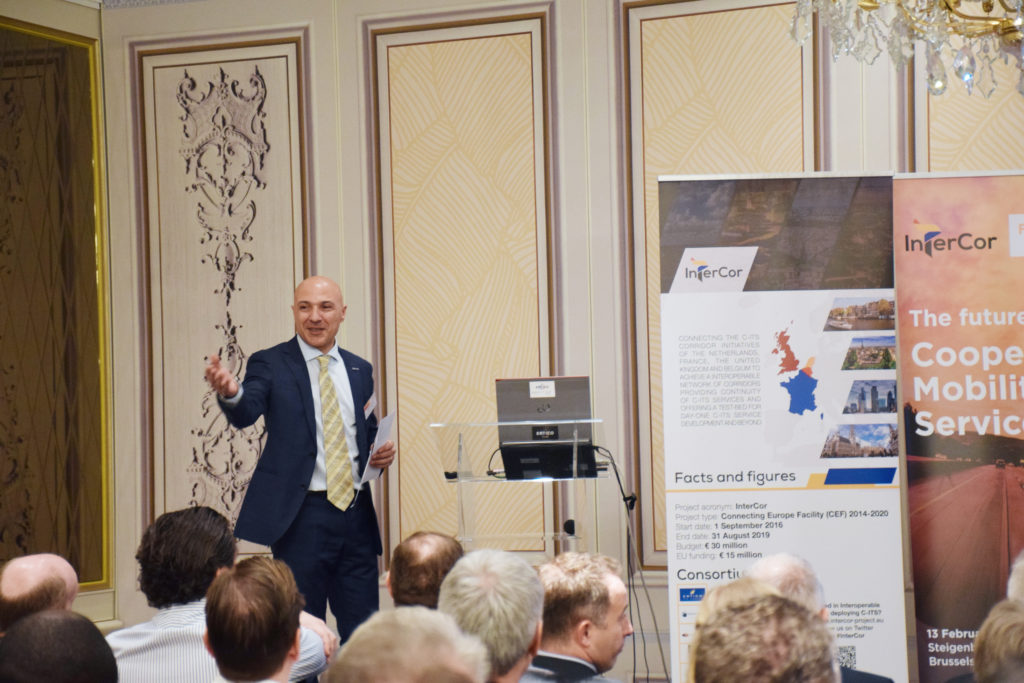 Messages from the road for safer and more efficient driving.
InterCor has tested how the information can flow automatically to the display of the user. By displaying the information on a screen inside the vehicles (an on-board device or a smartphone), the chance of drivers missing the information displayed on road side signs is reduced. In this way drivers can make real-time decisions and road safety and traffic flow can be improved. For example, the vehicle of the future will automatically receive information about road works, speed limits or traffic lights. Based on this information, the vehicle can then suggest a different route or speed to the driver, or even take partial control by automatically slowing down or changing lane. Undoubtedly, C-ITS and e.g. precise positioning enabled by Galileo GNSS can support automated mobility and enable self-driving vehicles on our roads.

“When we started the work, hybrid (communication) was just an idea and we were able to test and deploy it throughout the project, with results that are facilitating information to be delivered to vehicles on the road in an interoperable way. We have provided an architecture interface that allows information to be communicated in both channels, via cellular services and ITS-G5”, Eric Ollinger, French Ministry of Transport.

Pierpaolo Tona, INEA, European Commission congratulated the InterCor project for its achievements and stated that “CEF Actions are implementing EU policy on connected mobility (interoperability, continuity of services, etc.). CEF deploys and pilots technologies that are ready for the market, thus investing in mature technology moving from pilots to real, operational works.” 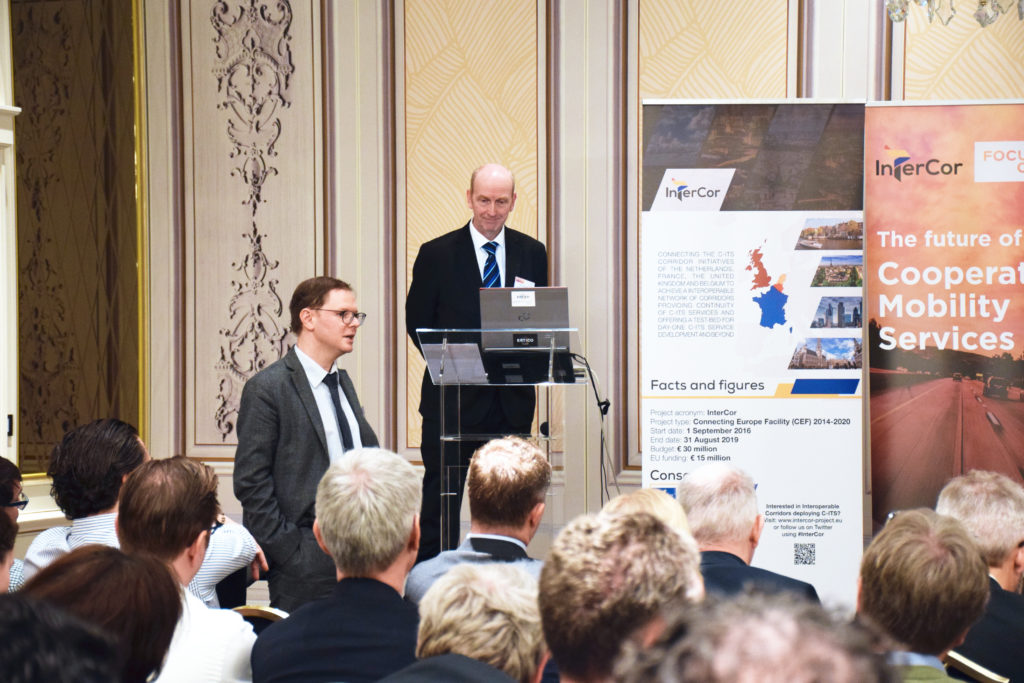 The future is now: from pre-deployment to market.
With the technology being there and ready to be put in place, there are still barriers to large-scale implementation and this depends equally on the public authorities as well as the industry bringing and using the technology. Two panel discussions in the afternoon ERTICO Focus On reached interesting conclusions by the decision makers and technology providers.

“2019 has been the year of deployment, 2020 is going to be the year of maturity” said Claire Depré, DG MOVE, European Commission. Francisco Sanchez, CTAG, expressed the need to “progress faster, as it is not anymore the time for small scale pilots, but for large scale implementation projects with a holistic approach in mobility management”. Eric Ollinger, French Transport Ministry, added that “it is time to look at the governance aspects beyond the mere C-ITS technology deployment”.

“The new European Commission has set new ambitions for a European Green Deal, which includes connected and automated multimodal mobility. C-ITS plays a significant role in making transport greener and InterCor is of the deployment projects which proves interoperability across borders is possible.” concluded Johanna Tzanidaki, ERTICO-ITS Europe. 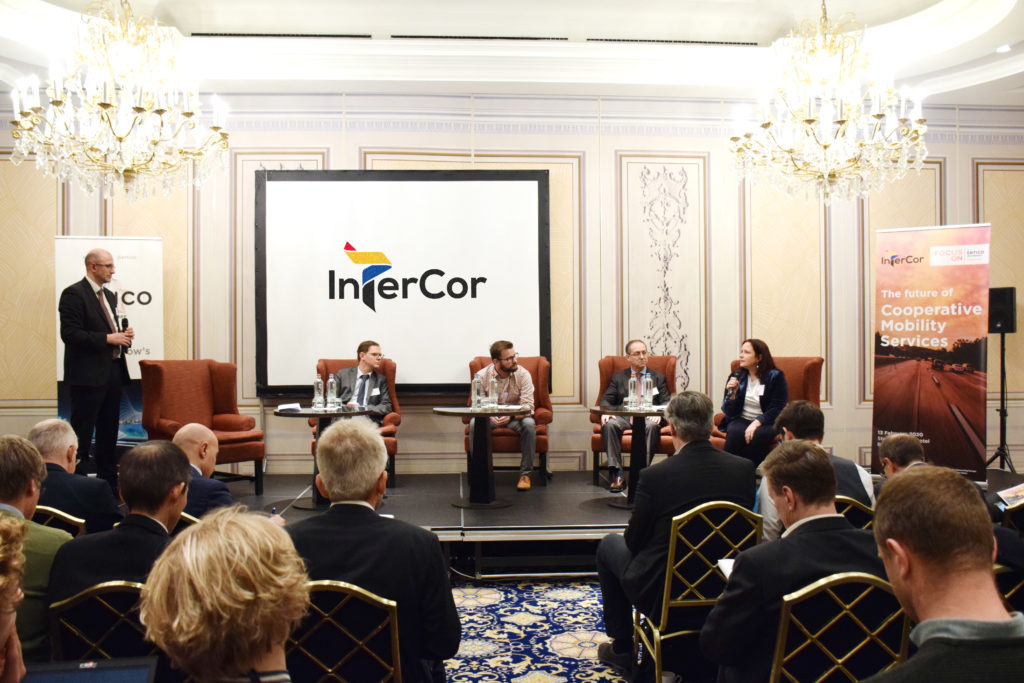