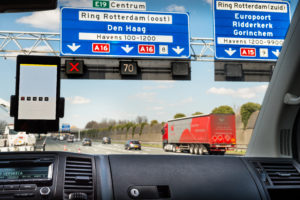 On Wednesday 22 March, Rijkswaterstaat undertook a successful validation test of the Road Works Warning service. During road works on the A16 near Dordrecht, information about the road works and available lanes was sent from Rijkswaterstaat systems to passing test vehicles using WiFi-P beacons.

The Road Works Warning service aims to present warnings to drivers about road works on their route, displayed on a suitable in-car computer. Information from the systems operated by Rijkswaterstaat and others, such as the exact location of the road works and the available lanes, is sent from roadside beacons to passing vehicles which are fitted with WiFi-P receivers. In future, the information presented to drivers in the car should correspond with what they see displayed above the road. The real-time provision of data to road users should increase safety on the roads, not just for road users but also for road workers.

Two message types
During the validation test on 22 March (part of Predeployment 1) two message types were sent to the test vehicles: a Road Works Warning service DENM message (Decentralized Environmental Notification Messages) containing the exact location of the road works, and In-Vehicle Information (IVI) messages with the information displayed on the signs over the road. On-Board Units in the test vehicles processed the messages to display warnings on an HMI device. Relevant international standards were considered when designing the information chain for the test.

Unique: In-Vehicle Information
The information sent to the test vehicles comes from a number of systems operated by Rijkswaterstaat and others and is aggregated in the Central Unit. This was the first time In-Vehicle Information based on information from a Central Unit and centralised systems was presented. Hence the Netherlands is the first European country to demonstrate this service during real road works. The project team gained a wealth of information which can be used for the current national and international specification projects. With this validation test Rijkswaterstaat has made a real contribution to ensuring that the Netherlands has a leading position in Smart Mobility and Cooperative ITS in Europe.

Positioning guideline
The test was also used for the initial validation of the guideline for the positioning of the WiFi-P beacons. This guideline was developed in consultation with potential suppliers. The key element of this guideline is that only a limited number of beacons should be installed. As the time the information is received may not coincide with the time of presentation on the on-board computer, there is no need to create a dense network (as is currently done for signal gantries over the roads).